Whisky casks are not the easiest of things to produce and the “cooper” needs years of experience and training to build that perfect whisky cask!  (The cooper being the person who actually makes the barrels or casks, full size whisky barrel height).

But Just How Whisky Casks Made? and How Are They Matured?

The creation of the cask

Oak trees are used in this process and are generally only cut down to produce a cask when they have reached a certain maturity. The trunks are sawn into planks and are cut and curved into what will ultimately form the circular barrel.

Now wood as we all know is a porous material and distillers in their attempt to produce fine whisky, would need the whisky to breathe and to interact with air. It is for this reason that the cask would be totally free of varnish or any type of paint. A hole would then be placed on the side of the cask, which would allow the distiller to monitor and check on the progress of the whisky. Once matured and ready the hole would also be used for the final emptying.

If we go back in time, we will see that a cask was formed of 32 staves with 15 more being used to seal the ends. The staves needed to be bent to the correct shape and so were exposed to fire. The cooper would plane down the stave to ensure that they all fitted neatly into place and to prevent any leaking. Materials used were nails, glue and metal hoops.

When we talk about cask maturation, what ultimately defines the influence or the taste of a whisky is exactly that! Now the length of time that a whisky matures is also very important, however the type of cask that you ultimately choose is crucial. The wood of the cask adds a real multitude of flavours depending on what cask you use.

A look into whisky cask types and capacities

When we purchase a bottle of whisky, the type of cask or barrel might well be stated on the label. But how many of us actually know what effect the type and size of the cask has on whisky? The important thing to remember here is that with casks that are smaller, the contact between whisky and wood is greater. 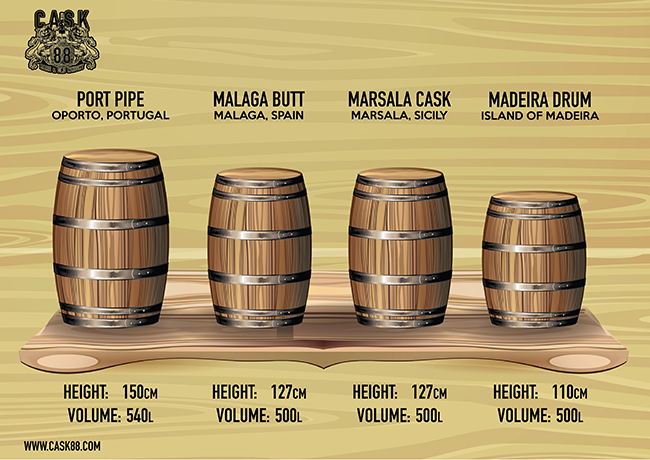 As you can see, the port pipe is a tall and thin barrel which has thick oak staves and which comes from and is manufactured in Europe. It looks somewhat like a regular barrel that has been stretched from end to end. The port pipe is used to mature Port wine and is also used in the whisky industry for finishing.

The Malaga butt is a tall and narrow cask which again comes from Europe and which consists of thick oak staves. This is a cask which is commonly used in the sherry industry in Spain and is also used within the whisky industry.

As the name states this comes from the region of Sicily.
The Marsala cask is used for the whisky maturation process and due to the sweet dark type of wine, whiskies that mature in these casks are usually a lot darker than your normal whisky.

The Madeira drum is a short and rather fat dumpy barrel which has a rather wide diameter.
It is made from very thick staves of French oak and as the name suggests, is used in the Madeira wine industry but is also used for finishing some whiskies.

A life of a cask

I am sure you now can see that the previous life of a cask has a real bearing on the taste and flavour of your end product. The type of cask that we ultimately choose will define the whisky that we distill.

2 thoughts on “How are Whisky Casks Made?”