Whiskies are a broad group of spirits produced from grain, with several distinct types of drinks included in the family. Scotch whisky and bourbon whisky are two most common types, each produced in unique ways that define its identity.

At present day, whisky is produced around the globe using a wide variety of distilling methods. With all the available brands, recognizing the exact type of whisky you are drinking can sometimes be confusing for less experienced drinkers. Needless to say, the differences in the production process affect the taste and determine how the whisky in question should be served and consumed.

If you would like to check out the range of bottled Scottish whisky we have then check out our shop, alternatively, if you are interested in pursuing the dream of every whisky enthusiast and owning your own cask of whisky check out this page.

To truly enjoy your glass of whisky, you should be aware how it was made and why it tastes exactly like it does. Since scotch and bourbon are the categories of whisky you are most likely to encounter, this short guide will focus on the distinction between these two large groups:

The most obvious way to discern between scotch from bourbon is to read the country of origin on the label. In order to be called scotch, a whisky must be produced in Scotland from start to finish, with nothing but local ingredients. Bourbons are similarly tied to the United States, where they are most commonly produced, although the geographic determinant is not as essential as with the Scottish counterpart. Products originating from third countries may not be advertised under these names, even if they follow a very similar production procedure, so you should be wary of whiskies that don’t state their home country clearly or undeservedly use one of the reserved terms.

While every whisky must be produced from grains, water and yeast to truly fit the definition, the selection of grains is not the same in America and Scotland. American varieties must contain at least 51% of corn to be considered proper bourbons, with possible addition of other contents depending on manufacturer’s preference. Conversely, scotch whisky is distilled mostly from malted barley, although some distilleries may include small quantities of other grains to refine the taste. Wheat and rye are most commonly added to the mixture, with caramel coloring also occasionally used as a finishing touch. Artificial flavors or fermentation agents are not allowed in either of the main whisky varieties – there can be no shortcuts to producing a perfect drink. 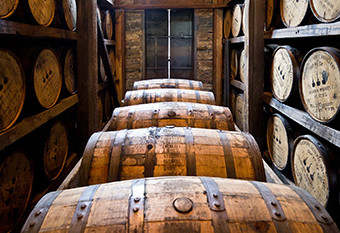 The production standards are also very clear regarding the alcohol volume of the distilled drink, with lower and upper limits defined for both scotches and bourbons. To earn its name, a scotch must be between 40% and 94.8% of alcohol by volume, while in the case of bourbon the upper limit is 80% (62.5% when it is stored for aging). Scotch has to be aged in charred oak barrels for at least three years before being sold, which is why this type of whiskey has a characteristic, woody taste that sets it apart from other spirits.

Bourbon is also almost always aged before reaching the market, though with somewhat less strict requirements.

So which is better?

To put it simply, every whisky brand has its own taste that appeals to certain customers. It is impossible to say whether scotches or bourbons are better in general, since that largely depends on individual taste. It is often said that scotch whisky takes a while to get used to and some whisky drinkers avoid it for this reason, but those who become acquainted with its sophisticated taste once often remain faithful to the greatest product that Scotland has to offer, drinking it solo or mixing it into powerful cocktails.

If you would like to check out the range of bottled Scottish whisky we have then check out our shop, alternatively, if you are interested in pursuing the dream of every whisky enthusiast and owning your own cask of whisky check out this page.