Scotland is fortunate enough to have two New Years to celebrate. By the old calendar the New Year falls on the twelfth of January. In Gaelic – ‘Oidhche Challainn’.

It is still celebrated to a degree in the islands, although celebrated might not be the right word. Maybe ‘marked’ is closer to the truth, a communal ritual to mark the passing of time.

The great Scottish poet Angus Peter Campbell talks of some of the traditions from his youth in South Uist, where it is called ‘Oidche Chullaig’. The children would visit every home on the village, reciting a rhyme which began with “Tonight I come visiting you, to renew you for the year.”

They would light a candle anew in each house. This candle was handed to each member of the family who would cross themselves and circle it three times around their head.

Song collector Margaret Faye-Shaw, collected these traditions in the 1920’s and 30’s. She took photographs of the children dressed as mummers in garments they made themselves, of course. 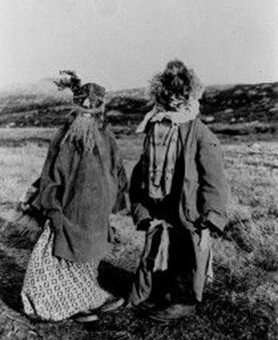 Angus Peter and I once visited Margaret Faye Shaw for a documentary on her life’s work – folklore collecting and photography among other things.

She lived on Canna, an island then of thirteen people, in a house filled with priceless objects. Beethoven’s piano, for example. She was in her hundredth year when we visited her, and I’ve met few people so inspiring. Some time was spent talking. Then she would jump up to play at the piano every once in a while. She liked to smoke regularly. She was ‘made of Pittsburgh steel’ as she said herself.

At eleven in the morning she decided we needed a break and in she came with a tray of whiskies, lit up a cigarette and talked to us about life, which she had always lived on her own terms. She’d had “a wonderful, wonderful life,” she said. But her advice was “but you’ve got to do it yourself. You’ve got to do it all the way yourself.” She meant you had to shape it yourself. It was in your power to do so.

The fact is, the whisky wasn’t there to get us drunk. It was there to establish the start of the social ritual. To make us sit together, and to open the space for conversation. An acceptance of all in the room into the ‘body o’ the kirk’, as they say.

The traditions Margaret Faye Shaw recorded are still found in some forms. With the modern New Year, the drinking of whisky together is very important. It establishes bonds and creates a community of conversation, wherever it appears. Visitors, or ‘First Footers’, often carry their own bottle with them, to share.

There is something in the way people created this themselves, from their clothes to their traditions. It’s something which is being rediscovered – how essential this connection to the human is, in the making of something. That’s something else we feel with whisky, that a succession of people have gifted it to us, from the coopers to the master blenders.

This video shot by Monocle takes a close look at the working of three small distilleries (gin, sherry and whisky). These makers are in close contact with their materials and the outcome of the process, keeping an ancient tradition alive and relevant in the modern world.

This perhaps explains why we find buying a cask of whisky so exciting. Doing so lets you enter the process in a different way. It gives you a very different sense of time in relation to the finished whisky. It brings you into contact with the materials that help to make it – spirit, wood and metal. You have a hand in it.

You have created your own tradition, something to be shared with friends and family. You are part of a golden thread of creating and workmanship. You’ve caused the making of something. Just as those generations before.