I arrived by a small plane and we flew in over the cliffs. It was really, really special. From up in the sky you get these amazing aerial views of the ruins and Viking settlements. You see these beautiful shapes, laid out a bit like jewellery. The landscape is extremely dramatic. (Søren Solkær, Photographer)

I came across an interesting image by photographer Danish photographer Søren Solkær. A man on his own on the moor, digging peat. A cutting iron and a heavy sky. 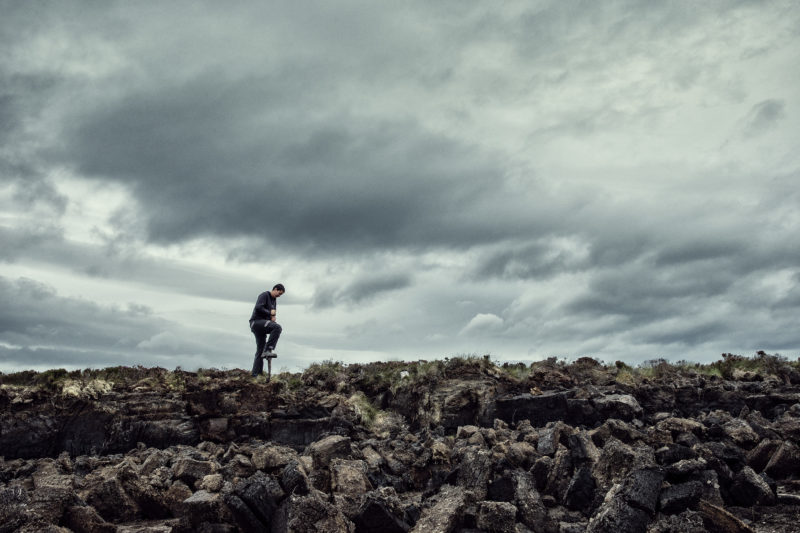 It reminded me of the heavy work that can be involved in making whisky. And it seemed to me to be worlds away from the usual landscape that Solkær works in – taking photographs of musicians like Oasis, Björk, and the White Stripes.

But the same rules apply, capturing humanity and character. Showing us something. By that measure, Solkær’s images of the Highland Park distillery really connect. Solkær says:

“I don’t really distinguish between celebrities or workers in a distillery. They are just people and I’m trying to capture something natural about them. The workers weren’t used to cameras, but also had strong personalities and were in their real environment, which makes it easier for me to tell stories with my pictures.”

That’s one of the things that keeps on bringing us back to whisky and how it is made. It has a story. This is Highland Park’s. 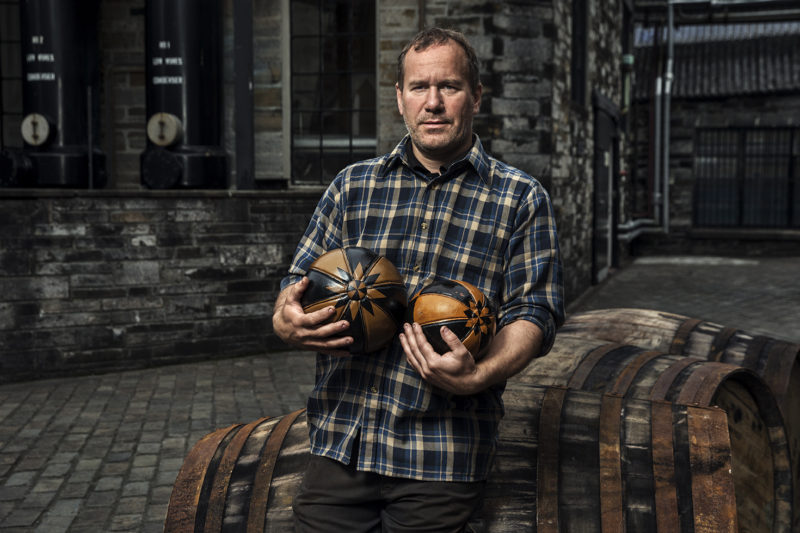 Highland Park was founded by Magnus Eunson in 1798 making it one of the oldest brands of single malt Scotch Whisky. It’s based in Kirkwall, on Orkney’s largest island.

The islands are on the same latitude as Anchorage in Alaska and Oslo in Norway. It’s a place famous for its sailors – the Hudson Bay Company had a great number of men from Orkney working for it. It has great farmland and the people are entrepreneurial. The weather is challenging.

As you’d expect, there’s a very strong Viking heritage. This is natural enough, as the islands were entirely Viking in their nature during the 8th and 9th centuries. The beautiful St. Magnus Cathedral is evidence of their handwork. Orkney was a key stop in the stepping stone route across the North Atlantic to the Faroes and Iceland. Craft and trade the cornerstones.

The islands have a long history of settlement, none longer, with the oldest house in Europe to be found on one of the outlying islands. It is home to some of the greatest Neolithic sites in Britain, such as Skara Brae and the Ring of Brodgar.

In 1468, Orkney became part of Scotland. They still don’t seem to be quite sure about it. 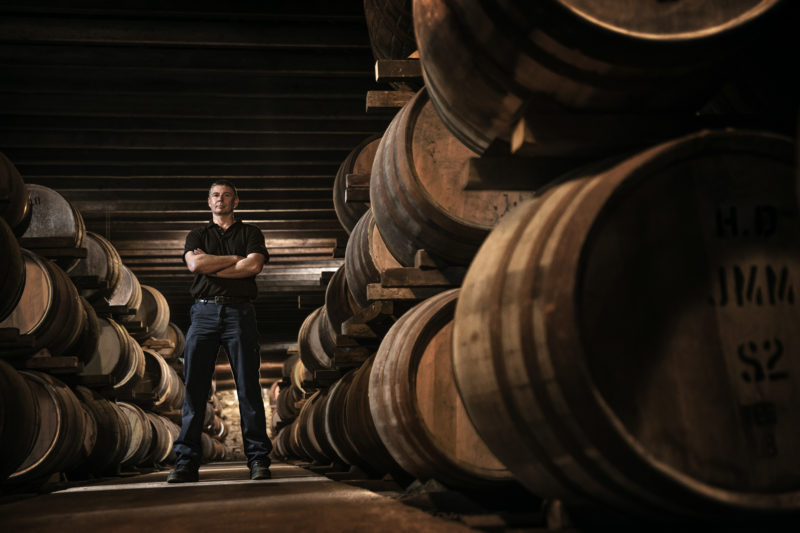 It’s against this background of time, land and people that the whisky is made. You see this lineage in the faces of the people making it. You see it in the different attitude towards time – the way things are done is the way things were done. Solkær continues:

“Everything is done by hand – I was really surprised. It’s very old school. I’d been told it was a very traditional process, but I don’t think I realised to what extent. You have to go inside, to the office, before you see a single computer. I’ve never seen a production process this large where so much of the work is still manual. They insist on that as they believe it’s part of the soul of the product. I found that really fascinating – how true they are to the heritage. Nowadays a lot of people are returning to old fashioned aesthetics and appreciating the craft and manual skills involved. Traditional crafts have become ‘trendy’ again – but Highland Park have just stuck to what they’ve been doing all along.”

The peat is cut in the traditional Orkney manner, using a tusker. This is from the Old Norse word ‘torfskerie’, which is literally ‘peat cutter’. There are different types of peat, from a lighter brown ranging to a black, the latter burning with more ferocity. This is what Highland Park use. 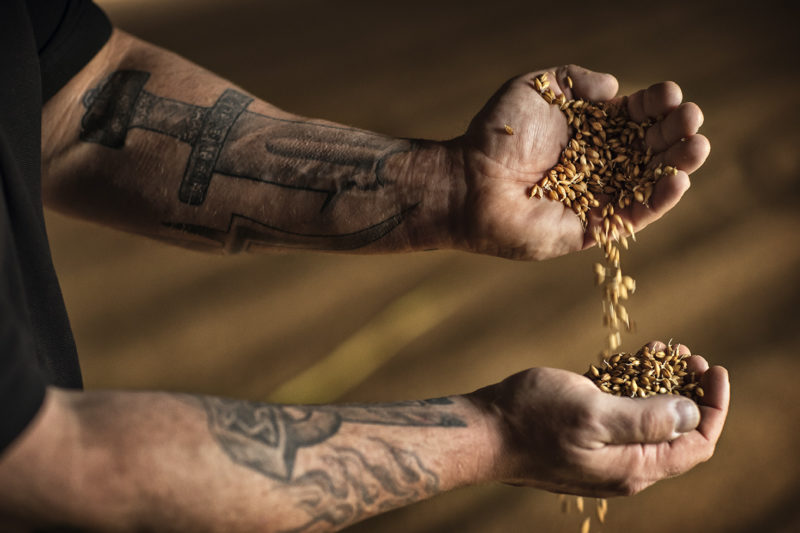 The Highland Park floor maltings is another wonder of nature. Really the distillery produces too much spirit to be able to cope with running their own floor malting. But yet again, it’s an example of staying with the old ways and the best ways.

The use of cask harmonisation is very interesting and not found that often. A number of casks are married together to help with the balance of the finished whisky. Highland Park favour Oloroso sherry casks for this above any other.

And finally, the warehouses, an enormous complex of buildings, many still with earthen floors. The maritime climate allows for cool maturation with not too much temperature variation. Peat smoke, heather and sherry are just some of the flavours the whisky imparts. 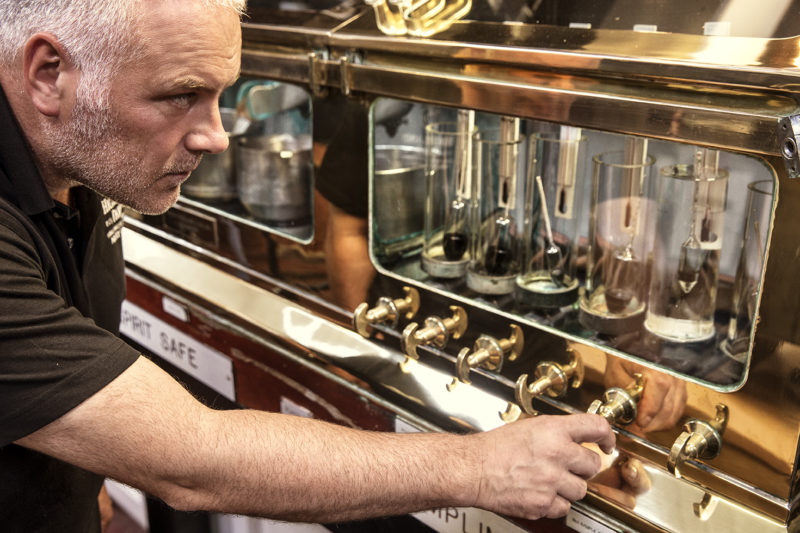 These are the five pillars upon which the art of the whisky makers of Highland Park rests. Solkær captures this wonderfully in his photographs.

The craft involved, the islands and the people seem to have captured Solkær, and one can see the connection he made with the place in his photographs. Timeless faces, hard workers, peat, wood and time. The flow of talk and whisky ever present.

“I spoke to every one of the workers while I was there. I’m very happy about that. Initially they were a bit quiet, but they all opened up over time. I really look forward to going back – they have a great sense of humour. One of them told me he’d never had so many photos taken of him – even on his own wedding day! I’ll be returning to Orkney to take more photos, and to try a special whisky that I tasted from a 1968 cask – I was born in 1969!   Drinking that one by the fireplace at the distillery was, pretty perfect.”

For sure, it’s a beautiful whisky to end the day with. 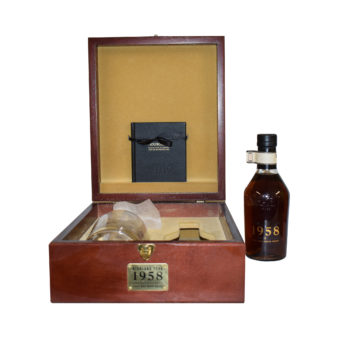 We have one bottle of this rare Highland Park whisky, a forty year old bottled in 1958. There were just over 600 of these produced. It’s a beautiful whisky, showing off the best of Highland Park.

With thanks to Highland Park Whisky and Søren Solkær.

Søren Solkær is a photographer, born in Sønderborg, Denmark in 1969.

Solkær is perhaps best known for his striking portraits of musicians. He has photographed the likes of Oasis, Björk, Pharrell Williams, PJ Harvey, Arcade Fire, Adele, R.E.M, The White Stripes and Franz Ferdinand with his signature use of dramatic lighting and subtle sense of humour. He has been a regular contributor to international magazines including Q Magazine, Rolling Stone and GQ and has had many solo exhibitions around the world.