Balvenie is a truly unique distillery in Scotland, and in their own words:

“Thanks to natural alchemy and centuries-old craftsmanship, The Balvenie is unique among single malts. Our whisky-making process is dedicated to maintaining the Five Rare Crafts and we are the only distillery in Scotland that still grows its own barley, uses traditional floor maltings and keeps both a coppersmith and a team of coopers on site. And of course, our Malt Master David C. Stewart MBE presides over the all-important maturation process. Making The Balvenie the most hand-crafted of single malts.”

Here at Cask 88, we are all about the journey and the pursuit of the finest examples of rare and old whisky, and Balvenie never fails to deliver. The distillery started production in 1893 and has consistently created fine whisky and notorious Malt Masters. The current Malt Master is David Stewert MBE, who first started at Belvenie back in 1962. David has been behind some of the most desirable releases including the brand’s first chapter Distillery Style in 2015 and The Influence of Oak in 2016.

“In my role as malt master one of the most challenging and ultimately rewarding aspects is the management of our large and precious whisky stocks,” said David Stewart. “

In October 2017, they released their oldest whisky to date as part of its DCS Compendium Chapter Three range – a 55-year-old single malt whisky. The Secrets of the Stock Model is the third instalment from the compendium, which celebrates the industry’s longest-serving malt master, David Stewart MBE. 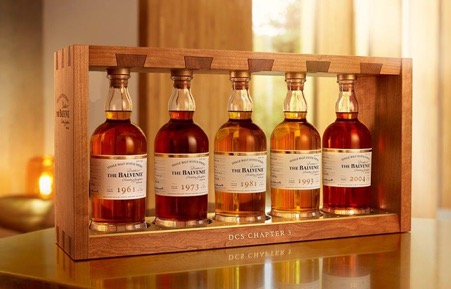 Cask 88 always looks to keep a stock of Balvenie available in our online store. At the time of this post our store has the following bottles:

Official Bottling of Balvenie named the Founders Reserve. A great whisky from the William and Grants portfolio.

This Balvenie 1991 is a rare official bottling that is highly coveted by fans of the distillery. It was distilled in the Speyside region of Scotland and has been finished in Port wood casks, adding to its depth of flavour.

Either bottle would make a wonderful Christmas present or gift for any whisky connoisseur. If you are looking for more than just a bottle check out our guide to buying a cask, the ultimate whisky collector’s dream.